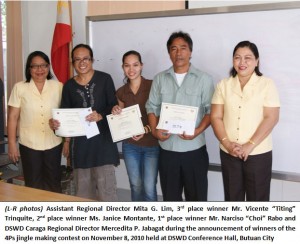 The Caraga Social Welfare Office here announced on November 8, 2010 the winners of 4Ps jingle making contest. In a simple ceremony held at the DSWD Caraga Conference Hall during the weekly convocation, Regional Director Mercedita P. Jabagat and Assistant Regional Director Mita G. Lim handed the certificates of recognition and the cash prizes to the first, second and third place winners. All three winners gave a live rendition of their winning pieces.

The first prize went to Mr. Narciso “Choi”  Rabo. A keyboard player, a flutist and an artist, Rabo got the judges’ nod of his original composition “Gabay sa Kaunlaran.”

The third place winner, Mr. Vicente “Titing” Trinquite is a composer, a stage director and a singer. His composition is entitled “4Ps.”

It can be recalled that in July this year, DSWD launched the contest with the theme “Kayang-kaya ng Pinoy Tumawid Tungo sa Kaunlaran” because it has recognized the important role of media in relaying message to the public.

The field office received a total of 10 entries. The winning jingle entries were able to highlight the importance of health and education in fighting poverty. The entries were judged according to the relevance of the lyrics to the theme, musicality and originality. # # #