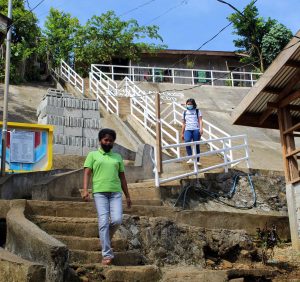 Life is full of choices. Some are easy but others are arduous, especially when it involves decisions that will make or break the welfare of the community.

Such difficult choices befall on the Mamanwa tribe, living in a highland village in the municipality of Alegria, Surigao del Norte province, when they were asked a few years ago to decide on what project under KALAHI-CIDSS PAMANA will they implement in their community.

KALAHI-CIDSS, otherwise known as the Kapit-Bisig Laban sa Kahirapan-Comprehensive and Integrated Delivery of Social Services, is one of the poverty alleviation programs of the government being implemented by the Department of Social Welfare and Development (DSWD). On the other hand, PAMANA, under the Office of the Presidential Adviser on the Peace Process (OPAPP), is the government’s framework for peace and development. KALAHI-CIDSS falls under the second strategic pillar of the PAMANA framework, which is building resilient communities.

In 2019, the Mamanwa tribe in Barangay Budlingin was very uncertain about what project they would choose. At first, they considered the construction of a tribal center in their village. However, the community saw a more pressing and urgent need in their barangay — construction of concrete slope protection.

The construction of the slope protection costs Php2,212,930, of which Php60,865 came from the coffers of the Municipal Government of Alegria and Budlingin. The project is expected to benefit 36 indigenous peoples households in the area.

The construction was completed on September 16, 2019, but was only inaugurated and turned over last June 30, 2022.

Mabalaw Labao added that they will take good care of the project and might develop it so that it will attract visitors. 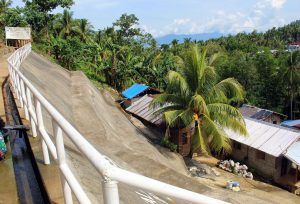 Indeed, the Mamanwas made the right decision. Thanks to the community-driven development (CDD) approach used by KALAHI-CIDSS, the Mamanwas are empowered to voice out and choose what project is best for their community.

During the inauguration ceremony of the said subproject, KALAHI-CIDSS Deputy Regional Program Manager Ester V. Villamor emphasized the importance of community participation and empowerment in the development of the barangay.

“Kanag proseso ug prinsipyo nga inyong natun-an sa programa, mao na among gusto nga inyong ikinabuhi (The processes and principles you learned is what we want you to live with),” Villamor said.

Aside from the slope protection project in Barangay Budlingin, several KALAHI-CIDSS subprojects were already implemented in the area. These projects include the construction of two box culverts, a concrete pathway, two drainage canals, a level II water system, and the installation of 40 electric street lights.