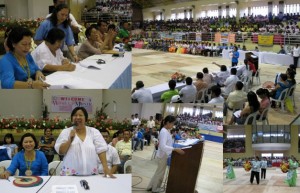 In her message, Director Jabagat praised the women for being the “Tagumpay ng Bayan.” She encouraged them to be courageous in reporting cases of violence because they are protected by different laws like RA 9262 or the Anti-Violence Against women and their Children Act of 2004 and RA 9208 or Anti-Trafficking in Persons of 2003.  Jabagat also informed the women of the newly passed law, RA 9710 or the Magna Carta of Women.

She told the women that President Arroyo signed the Magna Carta of Women (MCW) into law last August 2009 at the presidential palace in Manila. It is meant to be a comprehensive law on women’s human rights. It strengthens existing laws on violence against women and children, rape, labour migration and many others.

Jabagat lauded the officials of Bayugan City for giving importance to the disadvantaged sectors like women and children by supporting DSWD’s CoPIPAGV project.

Mayor Magdalena Asis exhorted the women of Bayugan City to continue to work together to strengthen their families and help increase family income amidst the issues confronting them today.

Ms. Lyca Therese Sarenas, CoPIPAGV National Coordinator, oriented the 2,000 women participants coming from the 42 barangays of Bayugan about CoPIPAGV. She said the general objective of CoPIPAGV is to contribute to the improvement in the health conditions of women, adolescents and girls through the improved prevention, treatment and rehabilitation of Gender Violence cases in Caraga region.

Sarenas said CoPIPAGV is an intervention structured around three components, which match the cycle phases of violence against women and children (VAWC) – Prevention phase, Intervention phase and Reintegration phase.

She also mentioned that Bayugan City will be provided with one (1) computer unit for the database and monitoring of cases of violence. CoPIPAGV is funded by the Spanish Government through the Agencia Espanola de Cooperacion Internacional Para El Desarrollo (AECID).