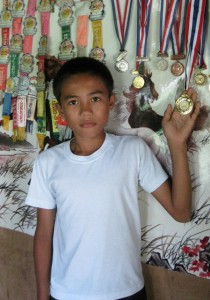 Sibagat, Agusan del Sur – Driven with the ambition to be a Marine Engineer someday, he proved that he can excel as long as he has the will and determination to fulfill his dreams.

Eldest of the two siblings, Niño made her parents very proud. “I never expected my son to graduate as valedictorian” says Luz Burlat, Niño’s mother.

Living in a barrio, surrounded with corn crops and vegetables, Niño dutifully study every night using only torch as his light, “and our nose will be filled with soot in the morning,” says Luz with a chuckle.

Niño loves challenges and competition. He never turned down any invitation to compete. During the Inter-school District Math Challenge Contest, he won the 3rd place. “I want to travel to other countries,” says Niño. “I want to build house for them, provide them maintenance for their medicines and provide them money for their daily expenses,” shares Niño, he also added that when he became a Marine Engineer he will hire a housemaid so that his parents will find time to relax.

“I didn’t dream of becoming rich one day, all I want is a better future because life is difficult, we need to plow soil before we can eat,” says Luz, teary-eyed when she heard Niño’s dream and ambition.

Luz, together with her husband Charlito, 42, works as farmers. Planting corn crops, eggplants, squash and beans is their only source of income. “Farming is difficult especially when you don’t have enough money to finance the crops and there are these pests that ruin your crops,” says Luz. Their buyers would purchase their crops for as low as P2.00 per kilo.

With the help of 4Ps, Luz’ worries on school expenses were lessened. Niño’s school project can now be addressed which encouraged him more to do well in school. In fact when Niño joined a Boy Scout jamboree, Luz was able to buy a new uniform with the 4Ps grant.

4Ps is not just plainly about giving cash grant to the poor, but also giving hope to its beneficiaries-helping them realize that life is not just about poverty and miseries but also about finding solutions to rise above the hole. ### (Social Marketing Unit)