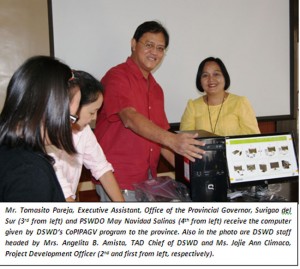 BUTUAN CITY – The Department of Social Welfare and Development Caraga Region recently turned over 10 sets of computer to areas covered by the Comprehensive Pilot Intervention Plan Against Gender-Based Violence (CoPIPAGV).

According to Angelita Amista, Technical Assistance Division Chief during the turn over ceremony held in Tandag City for the 4 LGUs in Surigao Sur, the computer sets given to the municipalities covered by the COPIPAGV will be used for data banking of cases of gender-based violence.

The DSWD has already distributed a total of 12 sets of computer including the two sets given to Surigao City and and Bislig City in 2009.