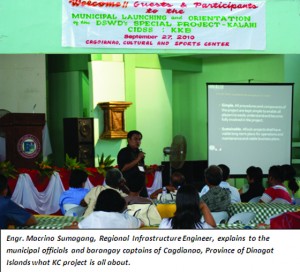 BUTUAN CITY – The KALAHI-CIDSS (KC) Project was launched in Cagdianao, Province of  Dinagat Islands on September 27, 2010 at the Municipal Gym. The project launching and orientation marked the beginning of the implementation of KC in the said municipality.

Engr. Macrino Sumagang, KC Regional Infrastructure Engineer of Caraga Region oriented the municipal officials and barangay captains about the project.  It was followed by an open forum, which gave the participants and the KC Regional Project Management staff, the opportunity to ask and answer questions and to clarify matters that were not clear to the participants.

In his acceptance message, Mayor Marc Adelson Longos emphasized that KC is a good project because it advocates transparency to prevent graft and corruption. He exhorted the municipal officials and barangay captains to support the project for this could be the start of changing people’s attitudes toward a corrupt-free municipality.

Longos called on his fellow Cagdianaonons through the barangay captains to support the KALAHI-CIDSS Project.

KALAHI-CIDSS is the Philippine government’s flagship poverty-alleviation project implemented by the Department of Social Welfare and Development through the financial support of the World Bank. It stands for Kapit-Bisig Laban sa Kahirapan- Comprehensive and Integrated Delivery of Social Services. # # # (Social Marketing Unit)