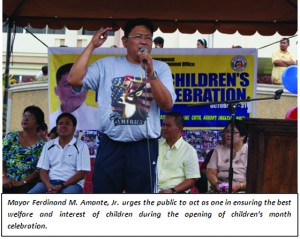 BUTUAN CITY – The City Government of Butuan under the leadership of Mayor Ferdinand M. Amante, Jr. hosted the opening activity of the National Children’s Monthy Celebration on October 1, 2010. The month-long celebration opened with a foot parade and a program held at the City Hall Grounds, Barangay Doongan, Butuan City. The opening activity was facilitated in close coordination with the DSWD Regional Office and the Regional Sub-Committee for the Welfare of Children (RSCWC).  In his message, Mayor Amante urged the public to act as one in ensuring the best welfare and interest of children.

As mandated by Presidential Proclamation 267 the whole month of October has been declared as Children’s Month. The purpose of this celebration is to create deeper public awareness on the issues and concerns affecting the children sector.

The National Government Agencies like NEDA, CHR, PNP, BJMP, DepEd and TESDA participated in the foot parade and program. The Pangkalambuan, Incorporated also joined the activity along with all Day Care Workers, Day Care Parents and Day Care Children in 86 barangays of Butuan City.