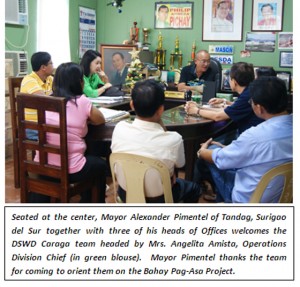 BUTUAN CITY – A transition and rehabilitation home for disadvantaged children called Bahay Pag-Asa will be built in Tandag, Surigao del Sur. This is in line with the implementation of Republic Act 9344 of the Juvenile Justice Welfare Act of 2006. The Bahay Pag-Asa is a 24-hour dormitory-type facility that will provide shelter for a maximum of 25 male children.

It provides temporary care for children who were apprehended and released by the law enforcers but could not be returned to their family due to absence of child’s family, difficulty to locate the child’s family, the incapacity of the child’s parents or the risky hazardous environment where the child and his/her family lives.

Caraga social welfare office director Mercedita P. Jabagat said the central office of the Department of Social Welfare and Development (DSWD) informed the regional office here that an amount of P2.5 M from the Priority Development Assistance Fund (PDAF) of Senator Francisco Pangilinan has been allotted for this project.  PDAF is a public fund appropriated and allocated for members of Congress to fund priority programs and projects.

As provided for in RA 9344 section 49, all local government units are required to establish a youth detention home as mandated by Family Courts Act.

On November 22, 2010, Tandag Mayor Alexander Pimentel welcomed and talked with the DSWD Caraga team headed by Mrs. Angelita  Amista, chief of the Operations Division. The team oriented the town officials on the project – its rationale, objectives, target clientele, project description, program components and limitations. Part of the orientation activity was the crafting of the Memorandum of Agreement.   “I am thankful to DSWD and Senator Pangilinan for the support extended to this project,” expressed Mayor Pimentel.  It can be recalled that the local government (LGU) of Tandag through the Municipal Social Welfare Office submitted a proposal to DSWD for Bahay Pag-Asa in September 2008.

The other members of the DSWD team that went to Tandag were Pio Japitana, Accountant; Leah Quintana, RIO; Aldie May Andoy, SWO III and Engr. Jovenal Bernat. # # # (Social Marketing Unit)