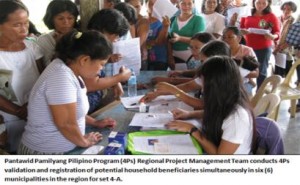 The selection of the beneficiaries was done by identifying the poorest provinces based on the 2006 Family Income Expenditure Survey (FIES). The selection of poorest municipalities were done using the Small Area Estimates (SAE) and FIES.  Then, a saturation survey of households was conducted in these areas. The last process is the computerized selection based on a ranking system using the Proxy-Means Test (PMT) developed for the program, which assess the socio economic characteristics such as ownership of assets or appliances, type of housing unit; level of educational attainment of households heads, and access to water and sanitation facilities.

The selected beneficiaries will receive a monthly cash grant maximum of P1, 400.00. Each child for a maximum of three children will get P300.00 for education and P500.00 for health.

The beneficiaries will now receive their subsidy every two months instead of every quarter, to immediately address the needs of the beneficiaries especially on health and education.

For the set 4-A beneficiaries, they will receive their cash grant in March 2011.

Caraga region, has a total of 54 municipalities for set 1-3 areas and additional 16 municipalities will be added this year with 44, 801 potential households.

Pantawid Pamilyang Pilipino Program is one of the flagship programs of the national government on poverty reduction and social development. # # # (Social Marketing Unit)