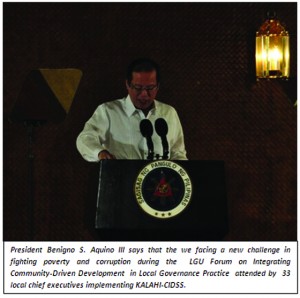 MALACAÑANG, Manila – 25 years ago, people roamed the streets of Metro Manila and with them were rosaries in hopes of a silent war to topple the then dictatorship of Ferdinand Marcos and 25 years later, the son (now the head of state) of the person who was the impetus of the EDSA Revolution says that we face a new challenge: fighting poverty and corruption.

President Benigno S. Aquino III shared this during the “People Powered Development: An LGU Forum on Integrating Community-Driven Development in Local Governance Practice” on February 24 to jumpstart the commemoration of People Power.

He added that her mother, former President Corazon Aquino once told him that the strength of People Power has a new and a different face – it was not about the crowds marching and singing in the streets nor the placards they brought displaying the face of Noynoy but rather preparedness.

Aquino said that people empowerment is still very much alive in the government’s anti-poverty program implemented by the Department of Social Welfare and Development, the Kapit-Bisig Laban sa Kahirapan – Comprehensive and Integrated Delivery of Social Services (KALAHI-CIDSS).

The President could never thank enough and praise the 33 mayors implementing the program in their municipalities with their stalwart performance even calling them heroes.

KC to be adopted as national program

In a resolution presented by the LGUs implementing KALAHI-CIDSS, they are urging the national government to adopt the KC strategy as a national program.

The President has directed the Cabinet cluster on human development to study the resolution basing from the consensus of the mayors that KC has been found to be effective in achieving local service delivery and best practices in good governance.

Social Welfare and Development Secretary, Corazon “Dinky” Soliman said in an interview that in a month they will be presenting the President the mechanism and strategy of the Community-Driven Development in details if it is to be adopted by all national agencies in implementing their projects. ### (Social Marketing Unit)