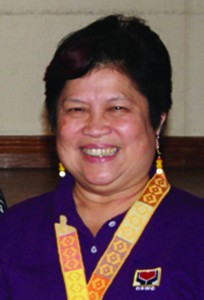 Also today, Secretary Dinky is scheduled to sign three (3) Memorandums of Agreement with the provincial and local government units of the province. These are the MOA on Convergence of Social Protection Services, MOA on Social Pension and MOA on Core Shelter Assistance Project.

Moreover, the Secretary will join the other regional and local officials in Barangay Tapian, Mainit, SDN for the Day Care Center inauguration and for the groundbreaking ceremonies of the Core Shelter Assistance Project.

A press conference with Secretary Soliman and provincial officials will be held at the New Gazebo, Provincial Capitol. Later today, she will meet the Regional Project Management Office staff of Pantawid Pamilyang Pilipino Program at the provincial Convention Center.

According to Director Mercedita P. Jabagat of DSWD Caraga, on April 8, Secretary Soliman will make a courtesy call to Bisahop Antonino Cabajog before her dialogue with the 30 Pantawid Pamilya and 20 SEA-K Beneficiaries. She will also hand over the social pension money to more than 200 senior citizens in Surigao City at the provincial gymnasium. # # # (Social Marketing Unit).