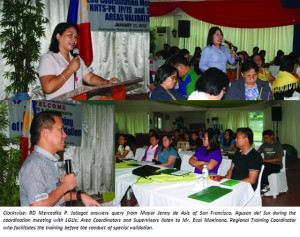 BUTUAN CITY – The Department of Social Welfare and Development Caraga Region is presently conducting a special validation in the seven (7) municipalities of the Province of Dinagat Islands and nine (9) municipalities of Siargao Island since January 15 until February 15, 2012.

The special validation is done to ensure that all potentially poor households are assessed and given the chance to be part of the National Household Targeting System for Poverty Reduction (NHTS-PR) database.  The database is now used as the basis for the selection of potential recipients of social protection programs and services of the national government.

All national government agencies are directed to use the NHTS-PR as a mechanism in identifying beneficiaries of the social protection programs of the government by virtue of Executive Order 867.

The special validation covers the households which were not visited by enumerators in 2009 assessments.

Meanwhile, the Field Office has conducted the data validation of indigenous peoples and informal sector that are included in the database of NHTSPR during the assessment held in 2009-2010 to know what IP group they belong so that it can be included in the list.

The following are the 49 local government units included in this indigenous peoples’ validation: