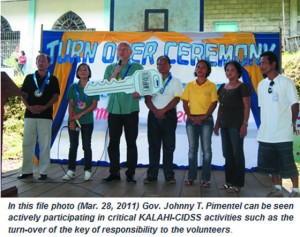 BUTUAN CITY – In 2011, the province of Surigao del Sur in Caraga region has been lifted out of the poverty status it’s been battling for years. According to a press release (July 2011, Mindanao Gold Star Daily) from the National Economic and Development Authority (NEDA) Caraga Regional Director Carmencita Cochingco, Surigao del Sur has “increasingly uplifted itself as incidence of poverty has gone down after it was consistently included in the Club 20 of the poorest provinces in the country for the last nine (9) years. Cochingco added that the present economic status of Surigao del Sur was attributed to the joint effort of the local government units here that was said to be ‘paying off’.

This is very true with how the provincial local government unit headed by Governor Johnny T. Pimentel has shown its strong support with the Department of Social Welfare and Development’s anti-poverty Project called KALAHI-CIDSS or Kapit-Bisig Laban sa Kahirapan – Comprehensive and Integrated Delivery of Social Services by investing in the human capital through capability-building and creation of social structures that initiate participation from both the LGUs and community volunteers.

The PLGU has been keen in enjoining its municipal local government units (MLGU of Cagwait, Tagbina, Marihatag, Bayabas, San Miguel, Hinatuan) to special projects introduced by the national government. With the requirement of KALAHI-CIDSS of a local cash counterparting (LCC) from partners, the governor ensures that his constituents are well-provided for. Needless to say, local cash counterparting is a difficulty other provinces in the region could hardly deliver.

All this quest for alleviating the poverty situation in the region is a result of the consistent support and active participation of the PLGU especially the PIAC and the governor particularly in the provision of equipment during sub-project implementation, lending the survey team, engineers, technical support, the delivery of local cash contribution. Even the vice governor intervenes in the expeditious delivery of lumber materials and bailey bridge panels. The governor also makes sure that he attends critical activities in the CEAC (Community Empowerment Activity Cycle) such as his attendance to every MOA signing, PLGU orientation, municipal inter-barangay forums (MIBF) and participatory resource allocation, and sub-project inaugurations. The Sangguniang Panlalawigan supports the KALAHI-CIDSS program through the passage of a resolution requesting province-wide coverage of the project.

The only hindering factor in the implementation of the project in the municipalities is the timing of the delivery of LCC and downloading of the grant fund. Though close coordination by the RPMO and ACT (assigned in each municipality) to the Municipal Area Coordinating Teams, MIAC and PIAC has proved very successful in this province amid the said financial issue. At the end of the day, the volunteers would still appreciate the process since they know where every centavo of the project fund goes to.

Taken from the PLGU report during the World Bank Mission in the province, the PLGU can now proudly stand to what the community-driven development (CDD) strategy hopes that “when participation, transparency, and accountability works in governance, then it is a system that works best as an antidote to corruption.” Through KALAHI-CIDSS, we are giving an avenue for local chief executives to showcase their performance with utmost intensity – pursuing community development without committing graft and likewise ensure culpability when failure is committed.

In fact, the World Bank was pleased that the PLGU of Surigao del Sur is giving a strong message that there is strong support and synergy among the PLGU, MLGU, BLGU, and the community volunteers. They stated that there is a solid sense of ownership of the project in the province which is very insightful in terms of learning the process and not just the provision of sub-projects.

The PLGU strongly asserts that KALAHI-CIDSS is the very first of its kind in project implementation in the province where the ‘grassroots’ are given a voice in decision-making and thus are accountable to their actions especially in the identification of their sub-project in response to the prevailing problem in the barangay.

Ultimately, Governor Johnny T. Pimentel expressed that no words could ever describe his gratitude to the project. Rarely has he seen a very transformative endeavor wherein passive communities become more involved and empowered – a feat that emboldens him of advocating KALAHI-CIDSS throughout his constituents and hopes of a total project coverage in the province. He may as well be the region’s “KALAHI-CIDSS champion governor.”