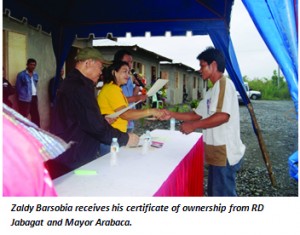 BUTUAN CITY–Ten year-old Rhea Joy Barsobia was inside their new house playing with her neighbors and siblings – Anthony, 13 and Stephen Lloyd, 8 as they waited for the community program to begin. It was December 16, 2011, the day that all 25 beneficiaries had been waiting for. Theywere all excited to receive their certificate of ownership that they didn’t mind getting wet from the downpour.

When asked what she likes about their new house, Rhea Joy, wearing a smile on her face and exuding contentment, candidly said in dialect“I like our new house because we have our own toilet. Several years ago in our house near the fishpond where my father works, we didn’t have toilet.  We have to be content using the toilet of our close relative nearby.”

The house occupied by Rhea Joy’s family is one of the 25 core shelter units funded by the Department of Social Welfare and Development and the local government of Magallanes, Agusan del Norte. Unlike their old house, which got flooded during high tide, the new house is located in a safe zone in Barangay Caloc-an.

Rhea Joy’s father Zaldy, 36 years old, a fish pond caretaker and her mother Roselyn, 34 years old, a housewife, expressed their happiness to have their own house, “Ang 2011 nga pasko ug ang 2012 nga bag-ong tuig mao ang pinakamalipayon nga okasyon sa among kinabuhi tungod niining regalo nga among nadawat gikan sa goberno – ang balay nga amo na gyud matawag nga among kaugalingon.” (Our 2011 Christmas and 2012 New Year celebration is the happiest occasion because of this gift from the government – a house we can call our own).

Before, the Barsobias lived in a dilapidated house that could be easily thrown away by strong winds. The core shelter, however, can withstand 180-220 kph wind velocity, thus keeping the family safe whenever a disaster occurs. The couple also thanked DSWD and the local government for this Core Shelter Assistance Program (CSAP).

To make their house liveable, the Barsobia siblings shared their plan, “Amog yud limpyohan among balay kada adlaw, tamnan namo ang palibot og mga bulak, gulay ug prutas.”(We will clean our house every day; plant the surroundings with flowers, vegetables and fruits). With their new house, life will never be the same again for the Rhea Joy and her family. ### (Social Marketing Unit)