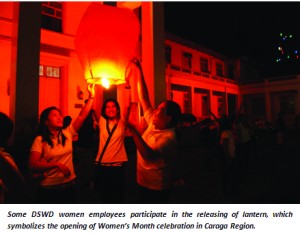 BUTUAN CITY – The Department of social Welfare and Development Caraga Region joined with other agencies in this year’s Women’s Month celebration. On March 1, all member-stakeholders have participated the opening ceremonies held at the Agusan del Norte Provincial Capitol covered court, where a mini-concert was conducted featuring local talents from the different national line agencies.

Also, releasing of sky lanterns highlighted the program which signified the opening of the month-long celebration. It was learned that around 500 sky lanterns were released by employees of the national line agencies during that activity.