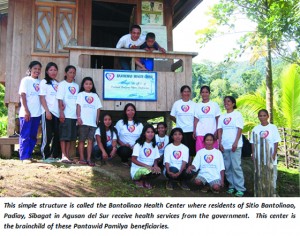 Right at the heart of Bantolinao, a structure stands where health services of the local government of Sibagat, Agusan del Sur are given to the community including the beneficiaries of Pantawid Pamilya. They called the said structure Bantolinao Health Center.

So, in one of their meetings presided by Evelyn during the early stage of Pantawid Pamilya implementation in their community in September 2008, the beneficiaries had a serious discussion on the conditions of the program that they have to comply with in order to avail of the cash grants.

The Sitio is part of the ancestral domain land of Barangay Padiay with major production on agro-forestry such as abaca and rattan.   The 98% of community members belongs to the Manobo tribe.

After thorough deliberation on the matter, the group decided to build a structure that they would later call Bantolinao Health Center so they would no longer go to Padiay to avail of the government’s health services.  Instead, it’s the midwife now who comes to Bantolinao to provide the residents health services they needed.  Every time she goes to the community, she would also bring all the necessary stuff like medicines, vaccines for immunization and vitamins for pregnant women.

Since they didn’t have money to buy the materials for the health station they planned to construct, the group members decided to contribute a minimal amount of P5.00 for their monthly dues. As soon as they got their first cash grant, each beneficiary shelled out P5.00 but the amount collected was not enough to start building the facility they needed to have.

With the P100 from the vegetable garden, they contributed P150 each when the next cash grant was released. The money was lent to a member who used it to buy abaca with 10% interest.  The P 2,950 capital then became P4,600. During the 6th cash grant release that happened in 2009 they contributed anew with the amount of P500 each member – at that time only 18 were able to contribute because one member just died. The pooled resources amounted to P9,000 plus the P 4,600 from the amount they lent to one of their members, they had a total of P13,600 capital for a sari-sari store.

The community members rendered “pahina” for the labor and donated locally-available materials such as lumber.  Started in 2009, the health station, which costs P 70,000.00 was completed and inaugurated in November 2011.  The local government assigned a midwife to regularly visit the station.

“As Pantawid Pamilya beneficiaries, this is our way of helping the community members of Sitio Bantolinao and their children avail of health services from the government.   We need not travel far just to attend regular health consultations,” said Evelyn.   ### (Social Marketing Unit)