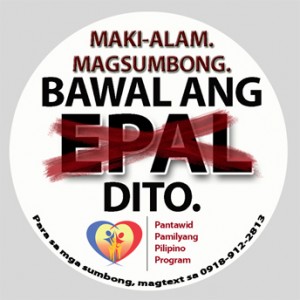 Butuan City – “Makialam. Magsumbong. Bawal ang Epal Dito” this is the tag line of the DSWD’s Bawal ang Epal Dito campaign that aims to eliminate the epal in the implementation of DSWD programs especially the Pantawid Pamilyang Pilipino Program.

According to Director Minda B. Brigoli, DSWD Caraga Regional Director, such campaign was conceptualized because the Department would like to protect its beneficiaries from being used or threatened by politicians and other groups to gain votes for the upcoming 2013 May election.

The Bawal ang Epal Dito campaign will also directly eliminate the misconceptions of the beneficiaries about the control of politicians over them.

Campaign materials such as tarpaulins will be displayed in the Pantawid Pamilya areas and during pay-out of cash grants; brochures, flyers, stickers and button pins will be distributed to beneficiaries as well.