“Kaya nato ang kabag-ugan kung magsinabtanay ug magkahiusa kita (We can handle change if we will be more understanding towards each other and we will be united),” – these were the words of encouragement the volunteers voiced during their barangay assembly in Brgy. Guadalupe, Esperanza, Agusan del Sur.

Guadalupe, composed of fifteen (15) puroks and considered the largest among the 47 barangays in Esperanza, is cited to be a municipality in the near future.

In order to realize this vision, they needed first to settle a boundary conflict present in their village which primarily involves the barangay site planned to be the town center in years to come.

Pertilote Vitor, 38, a day care worker, shares how her community settled such conflict through the intervention of the national government’s peace and development project which is the PAyapa at MAsaganang PamayaNAn (PAMANA).

Through the program, set of volunteers were nominated by the people in their village to frontline the implementation of a certain sub-project to address the most pressing need which greatly challenges the development in their community.

The need of the hour

The place that these people reside is a barangay site. Social establishments of the barangays won’t be put up because houses were already built.

Ronnie Lagumbay, punong barangay, opens that residents were very unwilling to vacate the place because they don’t have the assurance on where to settle. As he stated, each of them claim to have the right of ownership in the neighboring lands but weren’t sure on the exact location and division of their lands.

The villagers opted for surveying but most of them if not all could not afford to have the area be surveyed.

The first assemblies were really a challenge. The residents were very eager to stay and they weren’t open for any necessary changes presented to them.

In 2012, a number of assemblies transpired until it was decided that the community will utilize the Php 300,000 grant from PAMANA for the relocation survey expenses.

The solution they need

Evelyn Lozano, 36, a high school teacher and a community volunteer as well, narrates how pessimistic the households involved in the sub-project used to be.

“Ang technique nga amoang gibuhat kay permi namo sila gina-presentahan sa solusyon ug amoang gipasabot sa ilaha nga kani nga proyekto para ni siya sa kaayuhan sa tanan (The technique that we used is presenting to them solutions and we made them understand that this project is for the common good),” she quipped.

With the collaborative efforts of concerned community volunteers such as Pertilote and Evelyn, who primed the making of proposals up to the implementation of the sub-project,  the  community is now very happy because they are already relocated and they already know where they will be placed if the barangay will start to realize its development plans.

“Nakaginhawa na pud ko ug tarong karon kay nakita nako ang kalampusan sa among gitinguha nga masulbad and among problema sa boundary (I can now breathe easily that I behold the success of our aspirations to solve the boundary conflict in this village),” expressed Pertilote.

“Karon nga na-klaro na ang mga luna sa kayutaan diri, and uban ga-plano na nga ipa-konkreto ang ilang mga kabalayan tungod kay sigurado na jud sila (Now that the land/boundary markers are clear, other households are already planning to concretize their houses since they are now sure of the lands that they own),” she added.

Driven by their vision of improvement, the residents in Guadalupe are planning to put up the public market, gymnasium, and terminal in the area. These goals are slowly realized as the next two (2) cycles under the PAMANA project which amounted to Php600,000 were utilized by the community for their barangay road expansion and improvement.

Gone are the days of the unending debate and misunderstandings on the issue of boundaries in Guadalupe.  They consider their resolved community conflict as a stepping stone in gradually realizing their dream of a more peaceful and developed barangay.

The boundary markers packaged by simple yet meaningful stones serve as reminders to every resident that peace and development are both possible.  ### 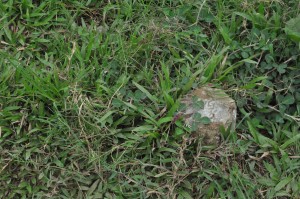