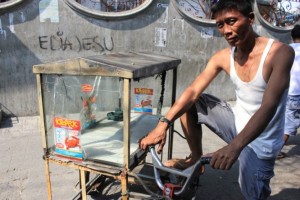 Nicanor or Mang Nik, 48, used to live on the streets with his wife Marivic Beatriz and their eight children.

Their deplorable plight ended when they were registered in the MCCT-HSF.  They now live in a rented house in Singalong, Manila, away from the perils and noise of the streets.

When Mang Nik’s family and other street dwellers were interviewed by a staff from DSWD, he was confident that help was on its way.

“’Nung sinabi nu’ng nag-interview na galing siya sa DSWD, kahit ‘di siya nangako ng tulong sa amin alam kong may tulong na darating (Even if the interviewer did not promise the we will be given assistance, I knew that help will come when he said that he was from DSWD),” Mang Nik continued.

It was an answered prayer for Mang Nik. He does not want his grandchildren to experience his and his children’s life in the streets.

MCCT-HSF provides a complete package of assistance to street families, including responsive shelter programs, with access to social services, and economic opportunities for the improvement of their living conditions.  It also extends house rental assistance of up to P4,000 per month for six months to one year.

Aside from the rental assistance, Mang Nik’s family receives cash grant for their compliance to the education and health conditionalities of the program.

According to Mang Nik, “Noong una, pinapapasok ko lang ang mga bata para makakuha kami ng cash grants.  Pero ngayon, naisip ko na mahalaga ang edukasyon.  ‘Yung pagbalik sa kalsada, iniwasan ko rin ‘yun pagkatapos ng anim na buwan dahil nakalagay sa kasunduan na mawawala kami sa programa pag bumalik kami (I used to tell my kids to go to school so we could get the cash grants, but now I learned to value education. I avoid going back to the streets because we will be removed from the program if we go back there).”

Another benefit of becoming a member of MCCT is having access to job and livelihood opportunities.

Mang Nik is now a construction worker at Philippine Sundt Construction where he earns P350 a day. To augment their income, Mang Nik sells popcorn at night.

“Nagsusumikap ako para sa pamilya ko para hindi na namin maranasan ang buhay sa lansangan (I work hard for my family so we will never have to experience life on the streets again),” he said.

With a stable source of income, Mang Nik’s family is proud that they now maintain the house rental by themselves.

He is even more proud to have given his loved ones the dignity that they rightfully deserve – to live in a safe place without the humiliating look of passersby. ###