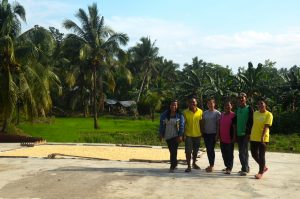 Broad smiles can be seen from community volunteers of Barangay Del Monte, Veruela, Agusan del Sur as they pose on their concrete pavement solar drier funded through Kalahi-CIDSS PAMANA. The community chose the sub-project since farming is the major source of livelihood for people in Veruela. During harvest time, farmers in the barangay used to lay and dry their grains in tarpaulins along public roads which resulted to poor quality of produce and losses. With their solar drier, they now have a better quality of produce and increase in income.

The community volunteers consider their sacrifice and labor for the community as one of their greatest accomplishments. According to them, they take pride on being part of the development in Barangay Del Monte.

PAMANA or PAyapa at MAsaganang PamayaNAn is the government’s peace and development program that aims to extend development interventions to conflict-affected communities. It is one of the modalities implemented by the Kalahi-CIDSS or Kapit-Bisig Laban sa Kahirapan-Comprehensive and Integrated Delivery of Social Services