Some students from Agusan National High School (ANHS) write their names and signature on the tarpaulin printed with “No to lowering MACR” to signify their opposition of the proposed lowering of the minimum age of criminal responsibility (MACR) from 15 years old to nine years old. 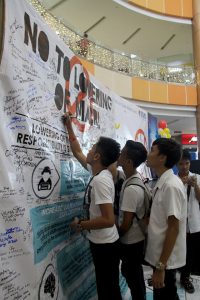 This was during the signature campaign of the Department of Social Welfare and Development (DSWD)-Caraga against the lowering of MACR. The campaign was launched during the kick-off program of the 5th Juvenile Justice and Welfare Consciousness Week held at Robinsons Place Butuan on November 21, 2016.

Recently, DSWD Secretary Judy M. Taguiwalo issued a strong opposition against the intent of House Bill No. 935 (An Act Amending Certain Provision of Republic Act. No. 9344, otherwise known as the “Juvenile Justice and Welfare Act of 2006 and for Other Purposes”)  and House Bill No. 3973 (An Act Lowering the Minimum Age of Criminal Responsibility Amending for the Purpose Republic Act 9344). ###(ABEGAIL R. ALVAREZ/Social Marketing Unit/DSWD Field Office Caraga)