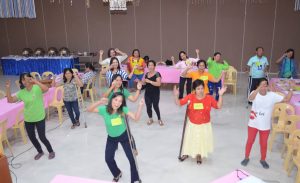 Empowered women with disabilities (WWD) in Caraga express through dancing their stand on how women like their sector make change in the society conveying the message that they have become not just mere objects of charity and other services rather subjects with rights, who are capable of claiming those rights and making decision for their lives as being active members of the society.

This was during their celebration of the 13th WWD Day on April 19, 2017 held at Prince Hotel Convention, Butuan City of which they shared their challenging experiences and their will and act to make change in their lives and eventually become better versions of themselves.

These strong women lived with the theme of the celebration which says, “Babaeng May Kapansanan, Manguna at Manindigan Tungo sa Pagbabago.” #