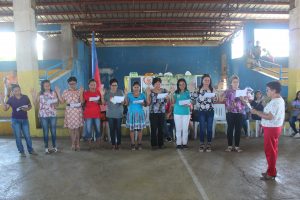 Determined as they have always been, the new set of officers of the Butuan City Pantawid Pamilya Parent Leaders Association officially pledge their loyalty in their responsibilities through the induction ceremony conducted at San Vicente Covered Court on December 4, 2017.

With Ms. Neda R. Barrios, Provincial Link for Agusan del Norte being the facilitator, the new officers were reminded of their responsibilities as official representatives of the Pantawid Pamilya partner-beneficiaries to guard the program implementation in their respective areas by promoting transparency, compliance to the conditionalities of the program and amplifying the message of success among non-beneficiaries###RyanMalbasTapayan/SocialMarketingUnit/DSWDFieldOfficeCaraga###