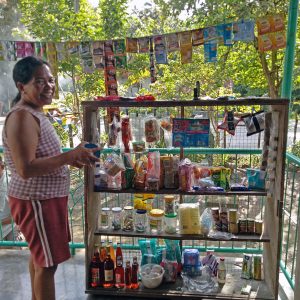 After the untimely demise of her husband Cesar, Mercedita Casanova, a Pantawid Pamilyang Pilipino Program beneficiary of Brgy. Lower Libas, Tagana-an, Surigao del Norte, was left with a broken heart and a hopeless spirit. Day after day, she mourned for the loss of her other half worrying what will happen in the next days, weeks, or months.

“Hapit na gayud ko mawad-an og paglaum ato. Apan nakahinuklob ko nga kinahanglan nako maningkamot alang sa akong mga anak (During those times, I almost lost hope. But I realized that I should keep on striving for my children),” she testified. She needed an enlightenment; and she got one. Fortunately, her second child Sheina, was include as one of the grantees of the Expanded Student’s Grant-in-Aid Program for Poverty Alleviation (ESGP-PA), a scholarship offered to all eligible Pantawid Pamilya beneficiaries. 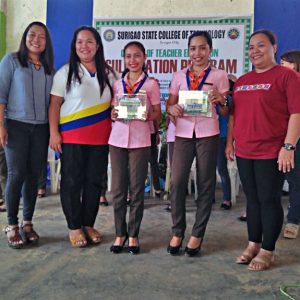 As a 4Ps beneficiary, her grants were already set to pay for Sheina’s allowance, practicum expenditures, and miscellaneous fees. With her small sari-sari store, Mercedita   manages to support her family’s consumption. Notwithstanding the difficulties of raising her children alone as a single mother, she was more than excited to see Sheina marching along the aisle towards getting her diploma of success. When Sheina graduated with a degree, Bachelor of Science in Technical Teacher Education major in Food Service Management last June 2018, Mercedita felt that all her sacrifices paid off and were not put to waste. “Nalipay ko og dako nga makita ang akong mga anak nga nagmalampuson. Sila ang akong bahandi nga dili mapulihan (I am very thankful to see my children being successful. I consider them my irreplaceable treasure),” she said. ###(JOANA RICA P. MILLAMA/Social Marketing Unit/DSWD Field Office Caraga)