Director Lim, together with Crisis Intervention Unit head Melanie Juan and other DSWD staff, distributed P10,000 cash, food and non-food items to each rebel returnee, who are from the province of Surigao del Norte.

The distribution came after the Department of Interior and Local Government (DILG) Caraga coordinated with the DSWD Caraga and other government agencies for assistance and services to the former rebels who are beneficiaries of the Enhanced Comprehensive Local Integration Program (E-CLIP). E-CLIP is a program of the government that ensures that surrendering communist rebels have a holistic package of benefits that they can avail of, such as livelihood assistance, medical assistance, education, housing, and legal assistance.

The event dubbed, “Building a Whole of Nation Commitment Towards Peace and Development for Barangays: Barangay Summit 2019”, is in line with President Rodrigo Duterte’s Executive Order No. 70 series of 2018, institutionalizing the Whole-of-Nation Approach in Attaining Inclusive and Sustainable Peace, Creating a National Task Force to End Local Communist Armed Conflict, and Directing the Adoption of a National Peace Framework. 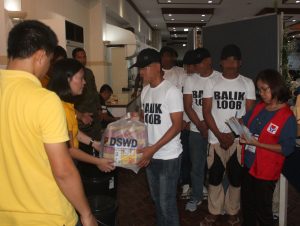 “Mao nang namugna kining Executive Order No. 70 tungod kay kini nga problema, problema natong tanan, kitang tanan ang mosulbad niini nga problema. Ug a matag usa kanato duna gyuy role. (That is why Executive Order No. 70 was created since this problem should be solved by us and each of us has a role) This problem cannot be solved if we will not work together,” Corvera added.