The Department of Social Welfare and Development (DSWD) FO Caraga through the Pantawid Pamilyang Pilipino Program and Landbank of the Philippines continues its distribution of new ATM card with EMV chip to its 4Ps beneficiaries all over the Region.

EMV stands for Europay, Mastercard, Visa. It is a global standard for cards equipped with computer chips and the technology used to authenticate chip-card transactions. This year, the transition from over-the-counter (OTC) mode of payment to the use of EMV cards was conducted in various barangay gymnasiums. But for one beneficiary, it was done differently. 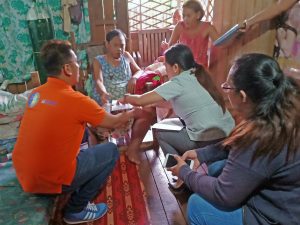 “It is satisfying that we have helped him. Dili babag ang kahago aron muhatag og tumang serbisyo alang kanila ug dili mabayran ang kalipay nga among gibati (Being tired is not a hindrance to give the right services for them and the joy we felt was priceless), “ Lauro shared.

Unfortunately, Isaac died last October due to complications. His wife, Angeline is now the new grantee of the Program with two monitored children beneficiaries. The household is still thankful that the DSWD staff and LBP extended efforts in distributing the EMV card personally before Isaac died.