The vastness of the ocean is beyond the knowledge of common people. Not all learn to understand how nature behaves – just like how a fisherman understands the movement of waves and wind in the middle of the ocean. But, does a man totally comprehend the ever changing behavior of nature?

Way back November 7, 2013, Philippines experienced the most unforgettable and painful tragedy ever recorded in the country – the Super Typhoon Hayan or locally known as Bagyong Yolanda happened. The Filipino people did not have any idea the strength of a super typhoon – no one had any idea what a storm surge was. This was the typhoon which became the life changer of so many Filipinos.

The life of a fisherman from Barangay Rizal, Municipality of Socorro, Province of Surigao del Norte changed after Bagyong Yolanda. Just like the other families affected by the historical typhoon, it left a serious dent in their lives.

Bongbong  Banay-banay Rudela, 28 years old, married to Charagin Ocon-Rudela – a father of 7 children, is one of the fishermen who went ashore 2 days before the landfall of Bagyong Yolanda. November 5, 2013 – 2 days before the super typhoon entered the Philippine Area of Responsibility, more than 20 fishermen from Socorro went out to sea to fish. Bongbong, together with 2 other men who happened to be his uncles went off together in the vast waters of Surigao del Norte.

They went out to sea and stayed out for 2 days and 2, until they decided to go back to shore to since the waves started to get really big and the winds have steadily increased its strength. But along their way home, the rain started to fall and intensified by the minute.

“Dili nako makaya nga molingi sa akong mga kauban kay sakit na kaayo ang ulan nga moigo sa akong tangkugo. Kung molingi ko sa akong mga mata ug nawong man moigo. Ako nalang sila gisinggitan nga ipanglabay ang mga kuha namong isda ug ubang pang mga kahon nga karga namo para mas magaan mi. Pabinlan ra nako og isa kay kung malunod mi naa pami abayan (I can’t look at my companions at the back because the rain was falling so hard it was hurting my nape. If I would try to look back, it was my eyes and face that would be hit by the rain. I just shouted at them to throw what we caught and the box containers to lessen our weight. I just told them to keep one box so that if we would be capsized, we still have a floater),” He added.

After a few hours of heavy rains and strong winds, the intensity of the wind started slowing down. But it was during that time that the full power of Bagyong Yolands was unleashed. Without warning, a very massive wave hit their Bangka and reduced it to smithereens. Bongbong was rolled and dragged underwater many times as big wave after big wave kept on passing through them. But he managed to swim, he called out his uncles and told them to grab the floating container and tie themselves together so they will not get separated.

The morning came, they were shivering, hungry, and exhausted – but they were still alive and still floating. Bongbong told one of his uncle to hold onto one of the outrigger of the boat which was detached when the wave hit them. But his other uncle was already acting weird – he was already irrational.

“Sige naman siya ingun nga molangoy siya palayo namo kay didto daw siya mo adto padulong sa pamilya niya. Dili naman siya magpaduol namo. Sige pud mi sunod-sunod niya. Mga 15 ka metro ang kalay-on na niya sa amo, nikalit lang siya pag-unlod ug wala na gajud namo nakita pa utro (He kept on saying that he will swim away from us because he wants to swim towards his family. We kept on following him, but he kept on swimming away from us, until he was about 15 meters away when he suddenly started sinking. That was the last time we saw him),” Bongbong shared while teary-eyed.

Their misfortunes continued the following day when Bongbong’s other uncle was bitten by a fish. The wound on his face was so bad that part of his jaw bone and his teeth was exposed. It was a battle for survival. They tried consuming their own shirts to fight their hunger. 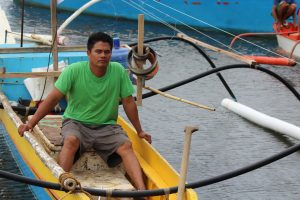 “Dili pa gyud ko makadawat nga ako nalang isa sa lawod. Gipanghinaan na kaayo ko atong panahuna. Pero gibuhian ra gihapon nako akong uncle kay maluya man ko og samot kung sige pako pugong niya nga molutaw (I can’t accept that I was the only one left in the middle of the ocean. I felt so hopeless at that time. I decided to let go of my uncle’s hand because I no longer had the strength to keep us both afloat),” He explained hardly.

Bongbong felt hopeless. He was alone. While on the middle of the ocean, there were 2 instances when a ship was seen in the horizon. But both ships did not see him floating.

“Ako nalang isa. Naay panahon naa ko nakita mga barko, apan wala gyud ko nila nakita. Nakahuna-huna ko hikog pagka-ika tulo ka adlaw gikan pagkalunod namo. Pero paghikot nako sa akong liog gamit akong sinina, gisakitan man ko mao akong gibadbad (I was all alone, but there two ships I saw passing by from afar, but they did not notice me. So I thought of committing suicide 3 days after we drowned. But when I tied my shirt on my neck, I felt pain so I untied it right away),” Bongbong said.

When he woke up on the fifth day since the incident, he could no longer hold on to the apparatus which kept him afloat. Too tired, too hungry, he thought of giving up- this time he was serious about it.

The fishermen sent him to the hospital. His sister and brother-in-law took care of him while on the hospital – he was there for one week.  When he got back to his family, his wife almost did not recognize him anymore. His face got swollen and full of wound. His wife felt bad not being able to visit him in the hospital.

Bongbong’s experience was dramatized in an FM Radio station in Socorro, twice, due to insistent public demand. Many people learned from his experience, many got inspired. After what happened, Bongbong had second thoughts of going back to fishing. But he had to, he had a family to feed. So even if he always remembers his ordeal at sea every time he goes out, he finds the courage to go on with his life with his family in mind. But this time, he comes home right away when the wind gets strong and the clouds gets dark. 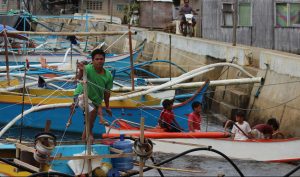 He also added that it was the first time that he was able to buy 1 sack of rice one time. Akong panghinaot gajud nga adunay ipuli nga programa ang gobyerno alang kanamo nga mga kabos sa panahon nga mahuman ang UCT Program. Ug kung ipadayon man ugaling sa gobyerno ang UCT Program, unta madugangan pa ang kasamtanang kantidad arun dili lang bugas ang among mapalit sa panahon nga madawat namo ang grants, (I hope that there will be a regular program of the government for us poor when the UCT Program ends. And if they would continue the UCT Program, I hope they will increase the current amount for the grants so that we can buy, not only rice, when we receive the grants.

Bongbong did not expect to be a beneficiary of any government program but now he is very happy because he felt that his condition is being recognized by the government.

The Unconditional Cash Transfer is a program of the government which provides assistance to the poorest of the poor who are directly affected with the increase of prices in commodities after the implementation of Tax Reform and Inclusion Law was implemented in January 2018.