The Department of Social Welfare and Development (DSWD) Field Office Caraga, through the partnership with the Bureau of Jail Management and Penology (BJMP) Butuan City, conducted an information drive on the Executive Order (EO) No. 70 at Butuan City Jail (BCJ) on March 2, 2020.

Both the DSWD and the BJMP have great responsibilities in attaining the goals of EO 70, series of 2018, otherwise known as “Institutionalizing the Whole-of-Nation approach in attaining inclusive and sustainable peace, creating a national task force to end local communist armed conflict and directing the adoption of a national peace framework.

About 200 Persons Deprived of Liberty (PDL) or detainees attended the information campaign, wherein BJMP officials and DSWD information officers discussed the perils in joining the leftist group and what the government is doing to address the problems of poverty.

Jail Inspector Diovin C. Auza, BCJ Male Dormitory jail warden, told the PDLs that they should guide their children so they won’t be “enticed with the sweet words” of these communist groups, adding that recruitment is very much prevalent in schools. 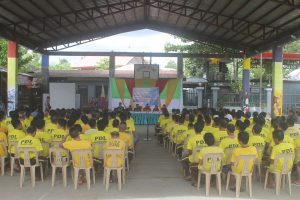 Auza also showed to the inmates the atrocities committed by the communists in the country in past 51 years.

DSWD information officers present discussed the programs and services of the Department, especially those that can be availed by the families of the PDLs.

Marko Davey D. Reyes, DSWD Regional Information Officer, said it is not true that the government is doing nothing to alleviate poverty in the country.

DSWD is active in its role in the execution of EO 70. Several programs and services of the Department. DSWD is the government’s executive department responsible for the protection of the social welfare of rights of Filipinos and to promote social development.