Many times she thought of quitting…but she didn’t.

At present, Bae Teresita Pinao, 62, a member of Mamanwa tribe, is the senior citizen president in Barangay Maraiging, Jabonga, Agusan del Norte, and the same time a barangay health worker for the indigenous peoples. The wife of tribal leader Datu Virgilio Pinao, a mother to eight children, and a grandmother to dozens of grandchildren, Bae Teresita is one busy Mamanwa woman.

Bae Teresita was also a community volunteer for Department of Social Welfare and Development’s (DSWD) Kapit-Bisig Laban sa Kahirapan – Comprehensive and Integrated Delivery of Social Services (Kalahi-CIDSS), which she said has a huge impact to her life.

But before she was filled with responsibilities, she was a very timid and shy woman.

Fifth in the brood of 13, Bae Teresita was born in said mountain barangay to farmer parents. Aside from tending the field, her parents weaved baskets and mats just to make ends meet for their children. Due to their circumstances, she only finished Grade 5.

Though she didn’t have a formal education, it didn’t stopped her from being participative in the activities of their community, given that she is also the better-half of the tribal leader.

Eventually, she was elected as kagawad (councilor) in their barangay. She finished her term in 2010. But what really made an impact to her was when Community-Driven Development (CDD) Approach was introduced to her through a barangay assembly.

In Caraga Region, DSWD piloted Kalahi-CIDSS program in Jabonga town in 2003. Kalahi-CIDSS is one of the poverty alleviation programs of the government being implemented by DSWD. Employing CDD as a strategy, Kalahi-CIDSS trains and engages communities together with their local governments (barangay and municipal) to choose, design, and implement development projects to address their most pressing needs. 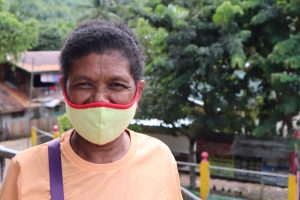 However, she was well aware of the challenges ahead, thus she was very hesitant to get involved with the program.

“”Kung naa kay katungdanan gahinan jud na nimog oras ug panahon. Sa sugod, dili jud ko. Pero para man pud sa tanan, mao akong gidawat ang katungdanan isip community volunteer (If you have a responsibility, you should set aside time. At the start, I really refused. But for the benefit of everyone, I accepted such responsibility to become a community volunteer,” she said.

Due to disappointments and exhaustions, she said she thought of giving up as community volunteer many times.

THE FRUITS OF CDD

CDD has not only made a huge impact to Bae Teresita but also to her fellow IPs, saying the Mamanwas now are active in participating any activities in the barangay.

She also shared that it was due to Kalahi-CIDSS seminars and trainings that she improved as a person.

“Sa una, mauwawon man jud ko mo-atubang sa mga tao. Akong nakat-unan sa Kalahi nga dili na ko dapat mauwaw. Kung unsa naa sa akong huna-huna nga angayan isulti o ipangutana, ako gyud isulti (I was a very timid person before; but what I learned from Kalahi-CIDSS is that I should never be shy or ashamed and that I should always express whatever I would like to say or ask).

Bae Teresita said she imparted and taught her family the value and importance of CDD, saying that she also asked her children to pass down these values and learnings to the next generation.

Though Kalahi-CIDSS-NCDDP is no longer implemented in Jabonga, Bae Teresita said that like Maraiging, many barangays still practice the CDD principles in their governance.