Norevic Nunez will never forget the traumatizing incident her husband had back in March 6, 2021.

It was around five in the afternoon when Christopher, Norevic’s husband, was on his way home after a long days work. While starring blankly at the distance, Christopher thought that their life has never been easy having no stable income being a farmer. Most of the time, they prefer to buy corn rice and could only afford for better quality, once their 4Ps allowance becomes available.

Christopher and Norevic, together with their four beautiful children have been beneficiaries of the Pantawid Pamilyang Pilipino Program of the Department of Social Welfare and Development (DSWD) for almost six years.

Christopher freed a deep sigh pondering that they might have “Ginamos” again for supper. “Ginamos” a supposed side dish for other Filipino families is the main course for most of the meals for the Nunez family.

On his way home, Christopher was called upon by his brother and his friend to join for for some drink.  With hopes that a sip of alcohol might mend a little of his worries, he decided to stop by and somehow spent time with them. 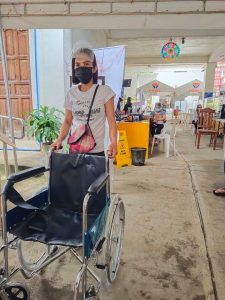 Norevic was crying while telling the story to one of the staff of DSWD. “Kung wala nabali ang sundang, iya pa daw unta gulgolon ang liog sa ako bana. Mao na ingon sa iyang manghud atubangan sa mga pulis ug sa mga tanod” (If the bolo had not been broken, he would have slashed my husband’s neck. That’s what his brother told the police and the Civilian Volunteer Organization (CVO).) Norevic said while her tears continue to shed.

Christopher’s left elbow and right knee were severely injured leaving him no choice but to undergo amputation. A week after the surgery, Christopher was discharged and was strictly recommended to take his home medications. Since Christopher belongs to the indigent member of the community, he was given the No Balance Billing (NBB).

Norevic was worried thinking that her husband might be in deep sorrow after all he’s been through. Surprisingly, when they came back to their house, Christopher was all smiles.  Seeing his children made him beam with delight – he was beaming with new hope.

Amid all these challenges, Norevic remains grateful for her husband’s second life. “Ako karon nagkuha og kusog ug pagsalig sa Ginoo. Kabalo ko nga dili me Niya pasagdan” (God is the source of my strength and I trust him, I know that he will never forsake us), she said.

Because of the gruesome incident, Christopher, the sole provider of the family, can no longer work leading a more serious financial situation to the Nunez family. With this, Norevic has to play the role of being a provider in the family. Along these lines, she accepts any kind of job that would help her feed her family. But being in the most difficult time of their life, Norevic can barely afford to purchase all the medicines that her husband has to take.

Soon enough, she sought the medical assistance of the DSWD through the Assistance to Individuals in Crisis Situations (AICS). Fortunately, all the medicines in the prescription amounting to Php 3,532.00 was covered. The social worker who accommodated Norevic recommended her to avail the Php 5,000.00 cash assistance and a family food pack. Furthermore, in coordination with the Regional Committee on Disability Affairs (RCDA) of DSWD, Norevic was provided with the list of requirements from which she can avail an assistive device for her husband for easier mobility. Eventually, Norevic and Christopher opted to have a wheelchair.

Now, Christopher is still recovering physically and emotionally. In spite of all that, Christopher remains grateful and hopeful. Having a wheelchair enabled Christopher to take brand-new steps. Despite his current boundaries, he aspires that these brand-new steps he is about to take will lead a fuller life amid the challenges he is in.

DSWD understands that losing a limb or two is undeniably a major emotional and physical burden not only for the family but for the victim as well. By means of assistive devices, the Department shows its efforts to ensure that even those with problems of mobility, just like Christopher, will still be able to freely and fully function within their limitations.